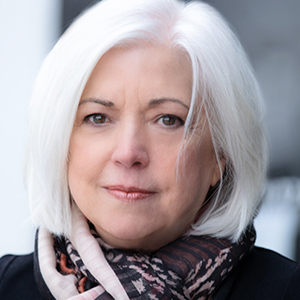 Kathryn Page Hauptman is a graduate of Wichita State University with a B.A. in Speech and Theatre and, currently, is the Founder and Producing Artistic Director of The Forum Theatre where she brings 30 plus years of experience as a director, actor, producer and costume designer.  She has produced and/or directed well over 200 shows including the Regional Premiere of Kabuki Medea with celebrated Japanese director/creator Shozo Sato; the American Premiere of Children of Eden with Tony Award winning composer Stephen Schwartz and the World Premiere of Jane Eyre with Tony Award winning director John Caird and actor Anthony Crivello, which subsequently went on to Broadway and was nominated for multiple Tony Awards.  She was the Founding Director at Center Theatre (formerly The Wichita Center for the Arts), and the co-founder and Artistic Director of Stage One where she produced multiple World, American and Regional Premieres working with national artists such as Stephen Schwartz, Paul Gordon, John Caird, Richard Maltby and David Shire, John Bucchino and more.  She is the recipient of the Mary Jane Teall Life Time Achievement Award and the Wichita State University Outstanding Alumni Award. Throughout her professional career she has been an advocate for new artists and new works.