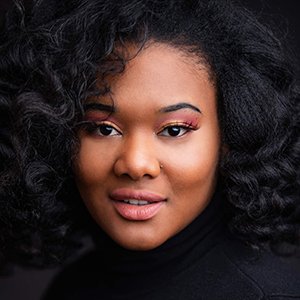 Anjelica  returns to The Forum after having been seen in The Royale, The Words & Music of Mahalia Jackson, Aretha Franklin, The Winter Wonderettes, and now serves as the Music Director for The Forum. A multi-faceted classically trained vocalist with expertise in classical, jazz and gospel. Born and raised and Charlotte, North Carolina, Touring across the United States with the renown choir as a soloist, she was exposed to a new world of Music. There Anjelica noticed a gift in singing opera. Later earning several accolades in the classical genre, she became the winner of the 105 “The Voice” Competition in Washington DC, has debuted at the Kennedy Center in Washington DC, and Grand Ol’ Opry Stage in Nashville, which she competed against 105 African American Opera Singers. Anjelica Breathett also featured on PBS television show “American Voices: Hosted by Renee Fleming”, playing herself as one of the Young Upcoming Future Artist and was selected to perform for the renown Gospel singer Kim Burell masterclass . Soon after, Anjelica relocated to Los Angeles from North Carolina where she received her Bachelor of Music degree in Vocal Performance and Musical Theatre from North Carolina A&T State University. Landed her first major role in Rodger and Hammerstein’s “Cinderella, the Musical” as their very own Fairy Godmother and Revenge Body By Khloe Kardashian as herself. While working on upcoming musical and television projects, Anjelica dedicates her time to singing, writing and compositions of her own, also working with other musicians in the Los Angeles/Wichita area.